Last summer, I received an email from John Brisland. He had read my feature on Jim Lauderdale in Country Music People; he is a fan of Jim’s, so that’s the first thing we have in common! 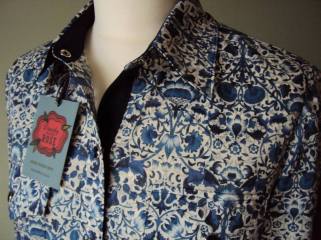 I had mentioned in the piece that I make some of Jim’s shirts, so John came over to this website to look. That’s when he realised the other thing we have in common. We each see a link between the designs of the Arts and  Crafts movement and western styling. It seems perfectly natural to me to take a piece of Liberty fabric with a print designed in the nineteenth century, sometimes by William Morris himself, and turn it into a western shirt. Morris’ inspiration may have been the flora and fauna of England, but that’s no reason his birds, strawberries and thistles shouldn’t appear on that most American of garments, a western shirt. That’s perfectly sensible, isn’t it?

It turns out that John thinks the same way. As he puts it, ‘uncannily’. He is a retired art lecturer and printmaker who, for the last several years, has been working on a series of prints and watercolours called ‘Wild Bill Morris’. They show a rugged but well turned out retro cowboy surrounded by Morris-style floral patterns – that’s him at the top of the page. Like me, John is inspired by a love of country music; he also enjoys a joke. He told me that ‘Hank Wangford has always been a great hero of mine. That heartfelt love of classic country music, tempered by an affectionate humour and irreverence! I have always related to the tongue in cheek, the visual pun, the sense of ridiculous.’ So when, like all cowboys, Wild Bill gets the girl, she is, of course, called ‘Calamity Jane Burden’. Here are the two Jane Burdens together, John’s version looking much more cheerful than Mrs Morris. But I understand there were reasons for that. 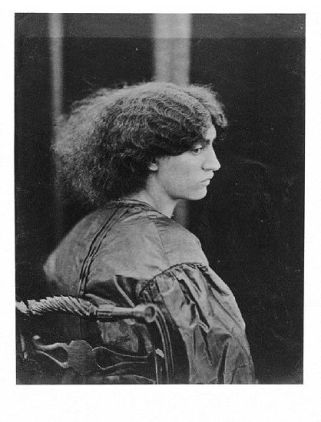 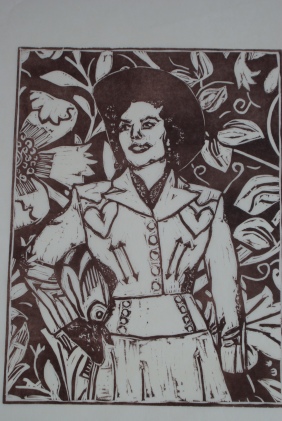 Sock It To Em by John Brisland

Wild Bill also has a sidekick. I’m not sure what he’s called. Sherriff Burne Jones, maybe?

Some of John’s prints are inspired by the style of Nashville’s own Hatch Show Prints, like the one on the left, below. His watercolours, like the one beside it,  show a glorious sense of colour:

That’s why, after I met up with John a few weeks ago when he was down this way, I found myself with this fantastic painting on the workroom wall.

It’s such an inspiration to know that great minds think alike, if I might be immodest enough to say so!