This weekend, there was snow on the ground and ruffles on my mind.

I love to see a man in ruffles, don’t you?

Whether they are crisp ruffles like the ones on the great Texan honky-tonker Dale Watson’s Seventies prom shirts:

Dale buys his shirts from the vintage website, RustyZipper.com. Now who else could have told you that?

Wait – is that even a man’s shirt? A suit order in the Nudie’s The Rodeo Tailor, now at the Autry National Center in LA, notes that Gram had a ‘small chest’ – so maybe not.

But my favourite ruffles are the ones on matadors’ shirts. Nursery-starched, white on white, pristine amongst all the sand, blood and spangles, they are my favourite element of matador attire, which is one of my favourite things of all. Here is Enrique Ponce, on whom I admit I developed a little crush when I was researching matadors’ suits of lights for a paper for the Design History Society’s conference last year:

So for a while, I have been planning to make a ruffled shirt for the Dandy & Rose collection, in honour of all these influences. And being snowed in was the perfect excuse. I decided on black, with white edging to the ruffles. I used the narrow hem stitch on my trusty Elna overlocker to make a neat, decorative edge and gathered up the ruffles with two rows of long stitches, like my mum taught me.

It’s quite good, but not good enough. Like all new projects, it turned out to have unexpected challenges, and I have learned a lot. So this week I’m going to be unpicking and re-doing those ruffles. And I’ve bought a gadget.

Now, I would like to be one of those hard-core seamstresses that resist gadgets and boast of using their granny’s sewing machine (some of whom regularly pop round to use my automatic buttonhole attachment) but I’m not. I love gadgets. You name it, I’ve got it. Magnetic needlecases with magnets so strong you have to wrestle the needles away from them; the magnificently-named ‘jean-a-ma-jig’, designed for helping the machine foot over lumpy bits. I specially love that one, even though a folded piece of card used to do the job. But not as well, I promise.

So now I have invested (and at £40 it was an investment, believe me) in Janome’s Ultimate Ruffler foot. Not just any old ruffler. Ultimate Ruffler. How could I resist? I hope it will be here for the weekend! Seamsters and seamstresses – stand by for a review! And pictures of the finished shirt! 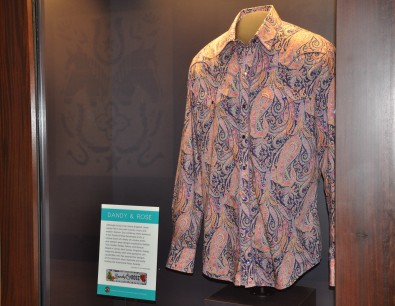